If ministers care about workers’ rights, why have they cut ACAS funding by a fifth? - By Tom Stephens

I recently wrote a piece for this website (see here) about the Government considerably cutting the money it provides to the Employment Agency Standards Inspectorate (EAS) – the body tasked with investigating unscrupulous employment agencies like those involved in the Sports Direct scandal.

In this article, I take a magnifying glass to the agencies which serve on the front line in enforcing workers’ rights.

These are the bodies tasked with taking calls from exploited workers, giving advice, and making referrals to relevant bodies. Unfortunately, as with the EAS, these bodies have faced severe cuts over the past seven years.

Furthermore, although the evidence is inconclusive, it appears that restructuring of the public bodies which take frontline calls could have led to an alarming drop in referrals.

Until recently, two government-funded bodies had a role in taking complaints, both from workers and employees, about issues in the workplace: the Pay and Work Rights Helpline (PRWH) and the Advisory, Conciliation and Arbitration Service (ACAS).

The PWRH was decommissioned in April 2015 and its functions were transferred over to ACAS. But to illustrate what these functions are, let’s go through both bodies in turn.

On the one hand, since its establishment in May 2009, the PWRH acted as the frontline in the Government's working rights enforcement regime.

It took telephone enquiries from employers and employees and, where appropriate, referred cases to any of up to six different Government organisations to take  varied enforcement action. In practice, if someone raised concerns about, say, non-payment of the minimum wage, the PWRH would have taken the call; then referred it to the enforcement team in HM Revenue and Customs. These organisations can also take cases directly, but most often they’re passed through an intermediary.

On the other, ACAS - which dates as far back as 1896 - is at once a mediation service in employment disputes, an educational institution which encourages best practice and a general advisor to employers and employees on various workplace issues. It deals with telephone and online enquiries, produces codes of practice for employers, runs training courses, operates an online mediation service and even commissions research to inform policymakers.

We have recently seen very big changes to the way ACAS operates. In April 2014, the Government made it compulsory for people to attempt alternative dispute resolution with ACAS before taking a case to an employment tribunal.

This massively increased the mediation responsibilities of ACAS. Then, in April 2015, as I noted above, ACAS also took up the role the PWRH had as the frontline call centre for people raising employment issues. From this date, ACAS took up the mantle of making referrals directly to enforcement agencies. In other words, in the past two years ACAS has taken on a considerable number of additional responsibilities. Have they been given enough support to do this work? I’ve undertaken considerable analysis of the figures, and the evidence shows it hasn’t.

To illustrate this, we’re going to have to look not just at ACAS’ funding and staffing, but to compare it with what the PWRH used to receive. The three figures below do this. 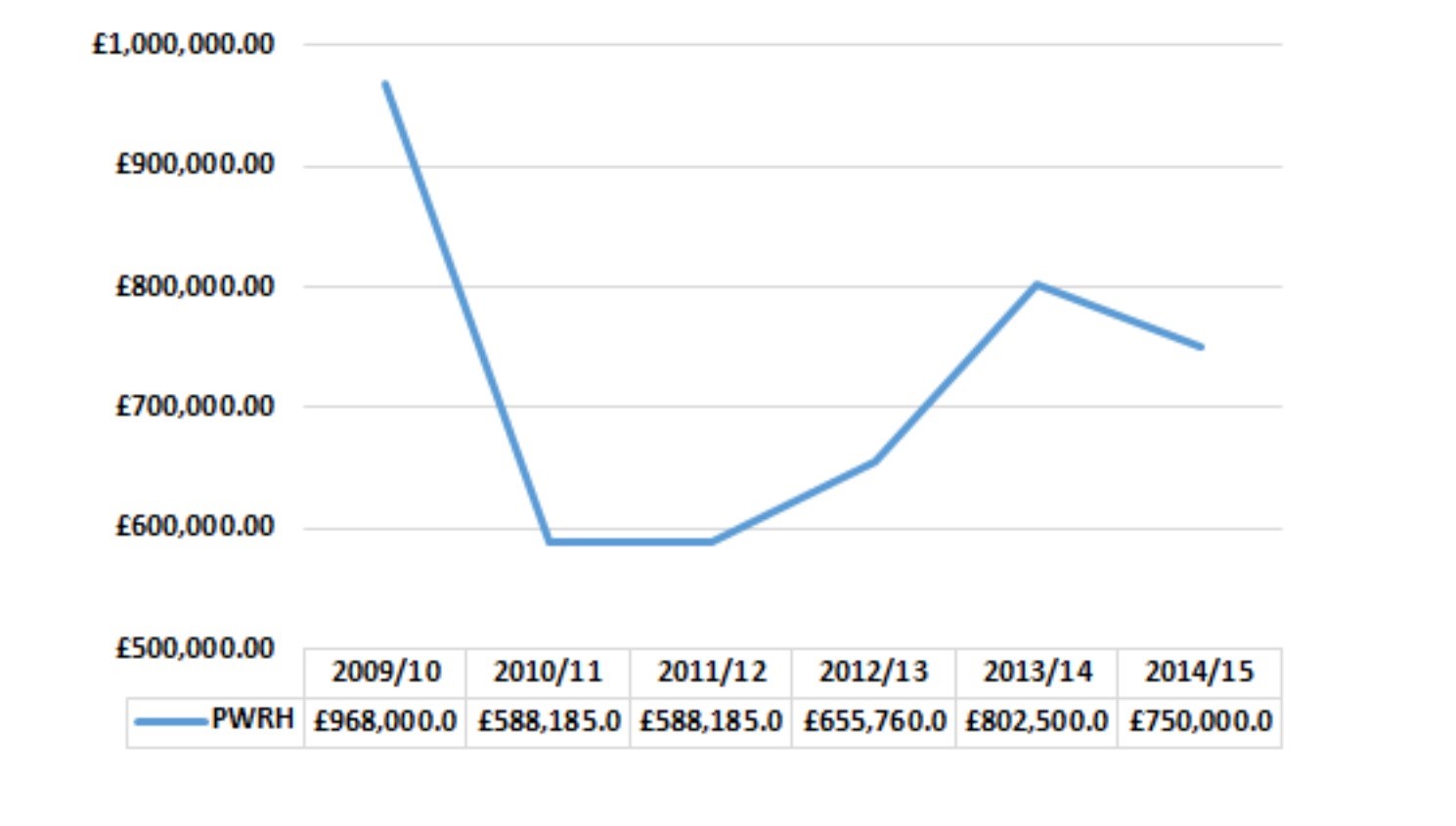 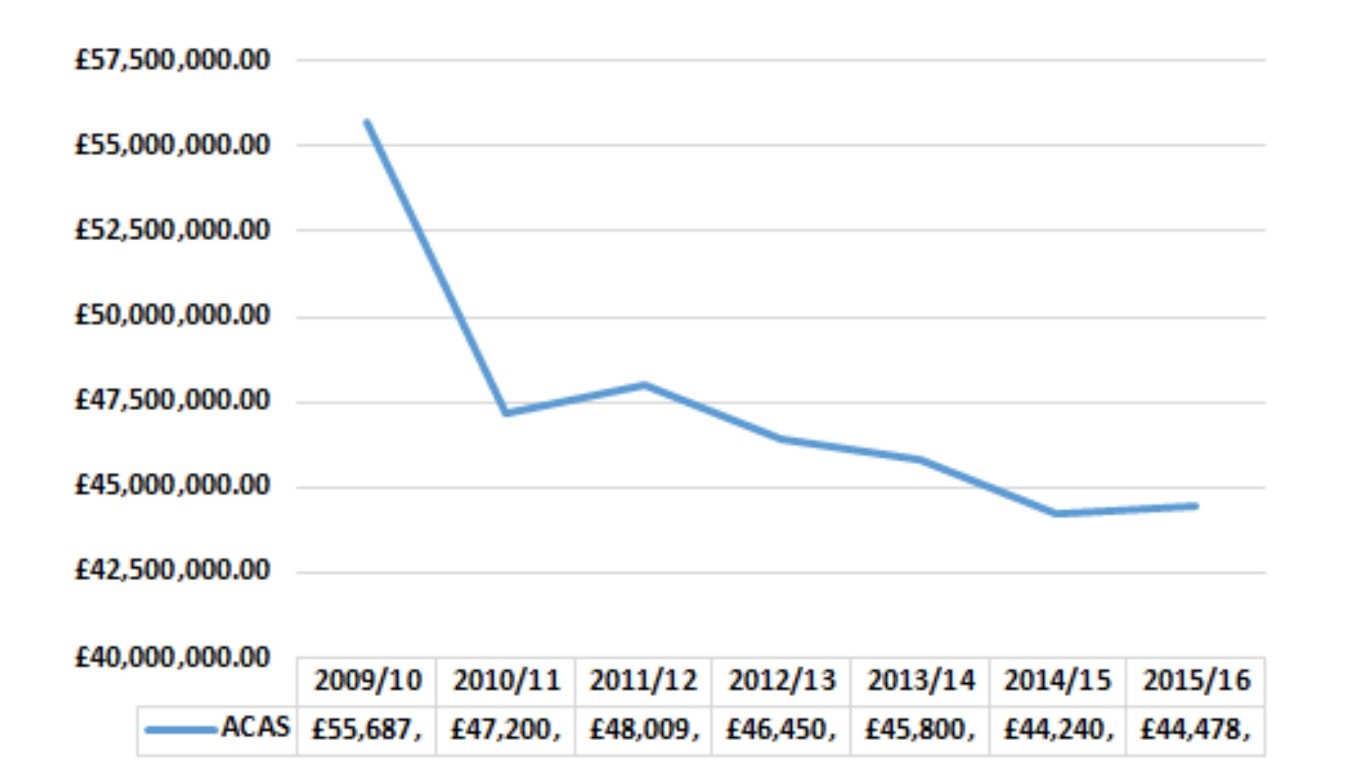 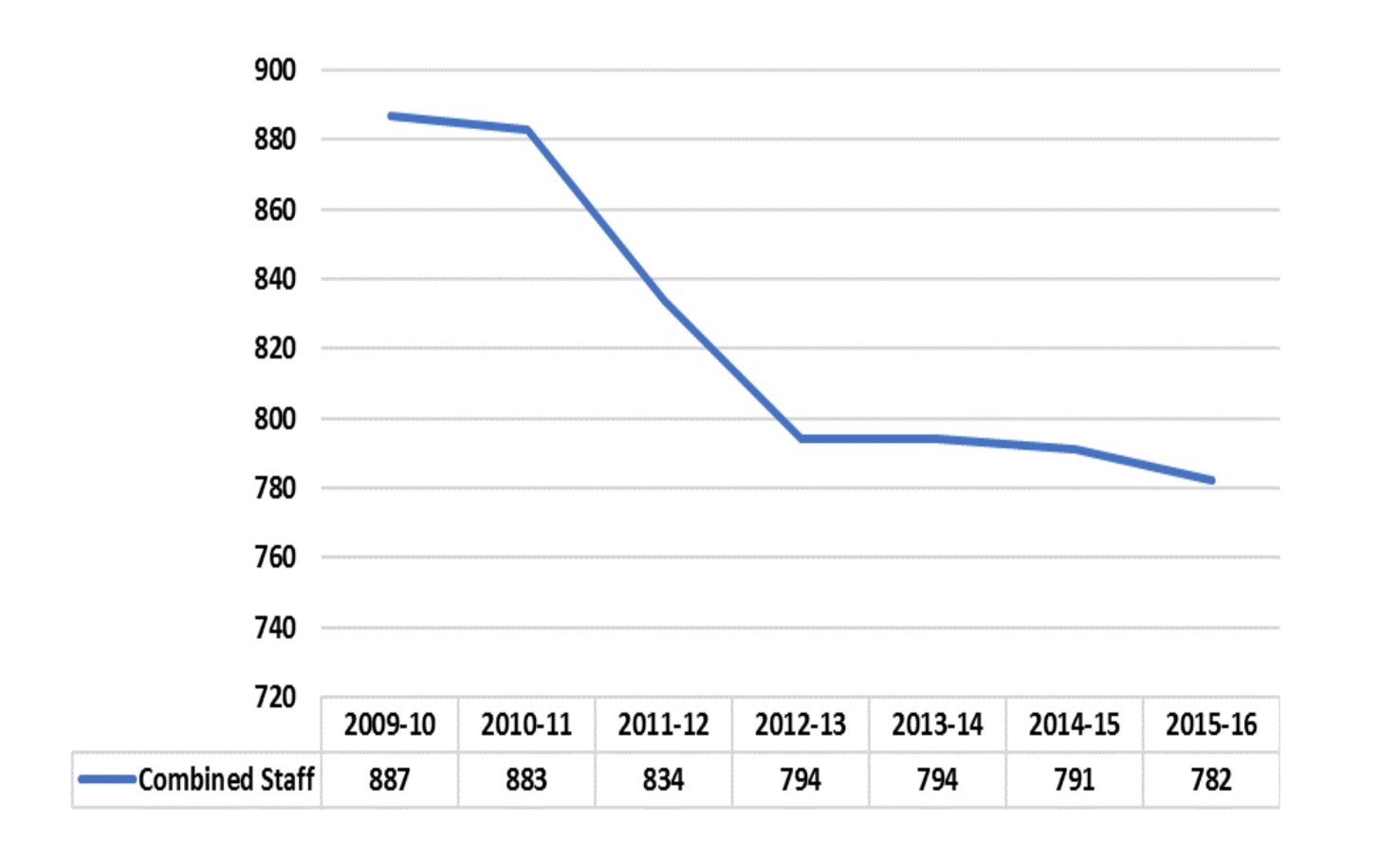 The numbers paint a far from rosy picture. On the one hand, the funding for both the PWRH and ACAS went down massively in 2010/11.

It carried on falling for ACAS, such that by 2014/15 ACAS received a 20% smaller Government grant than it did at the start of the decade. In a Freedom of Information Request to ACAS, they confirmed that this is the only money they receive.

We also know that over this same period, one in ten of the staff members of the combined two organisations have been laid off.  In the year they took over the PWRH’s responsibilities, ACAS received a small boost of over £200k to its funding – but this is a fraction of what the Government previously gave ACAS and the PWRH combined.

To top this off, we know that by this year, ACAS was already being asked to take on a much greater role in mediating before employment tribunal cases. So the organisation is being asked to do more with less money and fewer people. But I’m interested in knowing what this translates to practically, in terms of the number of referrals these organisations have made and the complaints they have received.

The two figures below give us a sense of what might have happened. Note that the 2015/16 data only takes us to February, but in no instance is this enough to change the conclusions drawn. 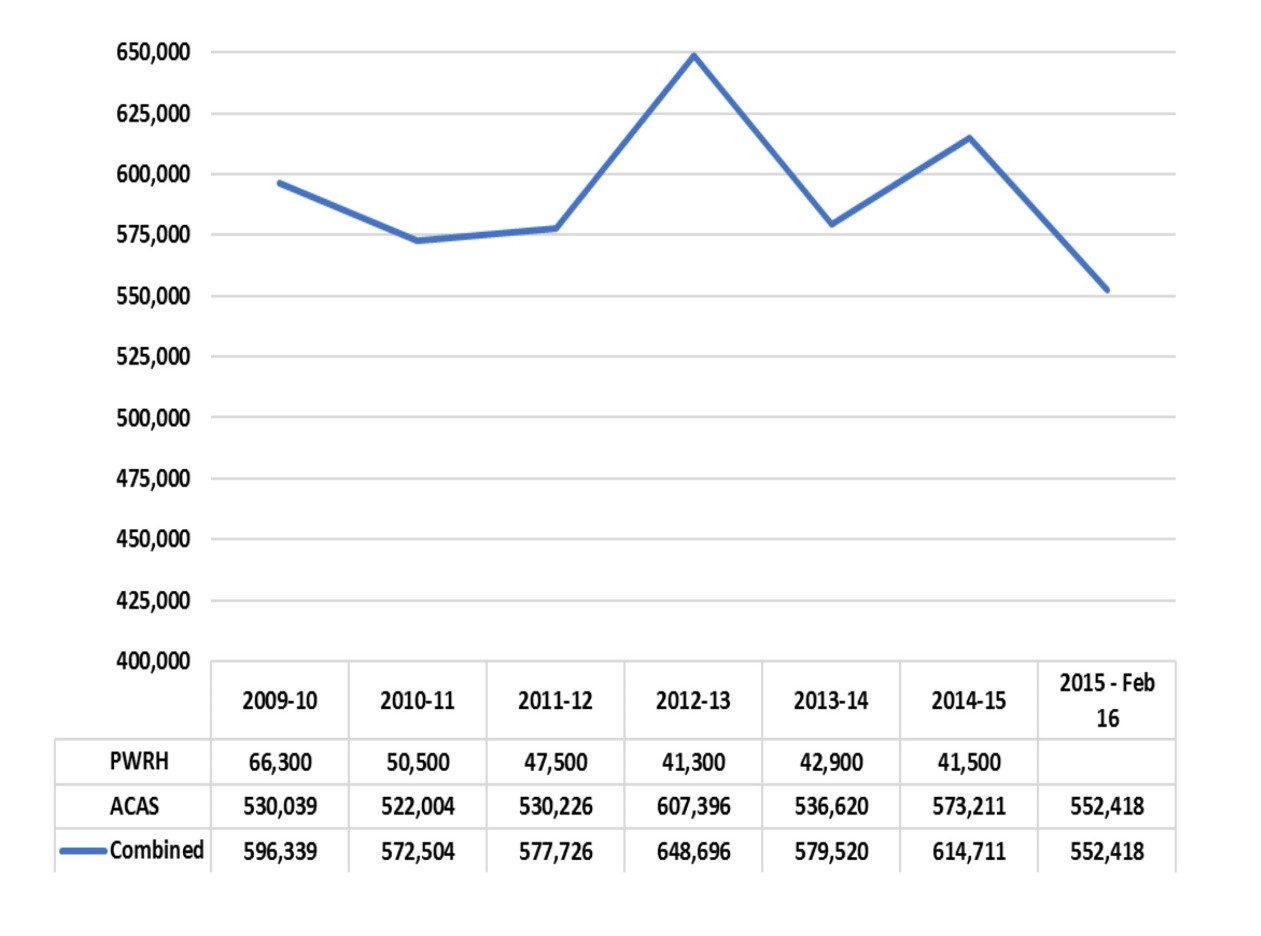 Given the data we have, it’s impossible to draw any definitive, causal conclusions about what  has happened. For example, it may be that there has been a genuine fall in the number of workers’ rights abuses recently.

Nevertheless, it is noteworthy that even though ACAS took on more responsibilities in 2015/16, the overall number of calls they received actually went down.

On top of this, in 2015/16 – just as ACAS starts to make referrals to public bodies about abuses – the number of referrals halves.

It is also significant that this drop in referrals is higher than the fall in calls to the helpline – so it can’t solely be explained a the fall in the number of callers.

We can hope that there is a benign, positive explanation for this. But it could just as easily be the case ACAS doesn’t have the money and personnel to make as many referrals as the PWRH previously did; and that the closure of the PWRH has led to the loss of some important expertise.

This concerning trend, when taken with my previous story on employment agency cuts, shows the Government isn’t doing enough to support the agencies which safeguard workers’ rights.

Some key organisations have seen their funding cut, and – most importantly – these cuts have been accompanied by some very troubling falls in enforcement activity.

We should all be doing much more to put these figures in front of Ministers and hold them to account for these failures - nobody ought to want to see the kinds of abuses perpetrated by Sports Direct becoming more widespread; or going unpunished.

* Note on Figure E. To make the data on referrals consistent, I exclude any PWRH referrals to the Department for Environment, Food and Rural Affairs (DEFRA), as the ACAS data I received does not contain information on DEFRA referrals