Young voters show we can be counted - by Tony Scattergood

Who saw that coming? I certainly didn’t - nor most of the political pundits and press.

No, Labour didn’t actually win, but the assumed wisdom that Theresa May would trounce Labour and 10 Downing Street stay in blue hands for a decade morphed into the PM claiming squatting rights.

These are paradoxical times in British politics, when a winner looks like a loser and the loser looks like a winner. Then again, politics is a fluid science in which there is nothing so uncertain as a foregone conclusion.

We must give credit to Labour, especially Jeremy Corbyn, for running a hugely effective campaign.

This is where he has always excelled; his strength is in appealing to people and he has the linguistic, ideological arsenal to back it up.

It’s subjective of course, but hard to deny he comes across as someone who understands the plight of the downtrodden and is in touch with the everyman. At the least, it can be said he’s objectively better at these things than May, although that isn’t a terribly high bar.

You could say that his appeal is virtuous populism - though benefiting from a massive, steroidal boost via the dismal campaign fronted by Theresa May.

It was so lacklustre and uninspiring that there isn’t much need for post-mortem examination, as most of us, including Conservative supporters, watched through our fingers and squirmed as she scored own goal after own goal; what might, a few weeks ago, have been called ‘doing a Corbyn’.

May had a dozen ‘bacon sandwich moments’ without coming within a furlong of a bacon sandwich. It was quite an achievement from her commanding heights of two months prior.

More than anything else, this election was about the mobilisation of the youth vote and the difference they can make to the political landscape when they are engaged.

It’s not an understatement to suggest that perhaps the key component in helping Labour achieve such success was due to the high turnout from the 18-24 years old, with an estimated 72% going to the ballots.

Judging by historical standards this is the biggest youth turnout since 1974 – an occasion to be celebrated regardless of political affiliation. We need more young people to take an interest in how the country is lead, by what people and principles.

Young voters have been disenchanted with politics for a long period of time now, to the point of apathy. Turnout has fallen consistently over numerous years - reflected in the graph below. 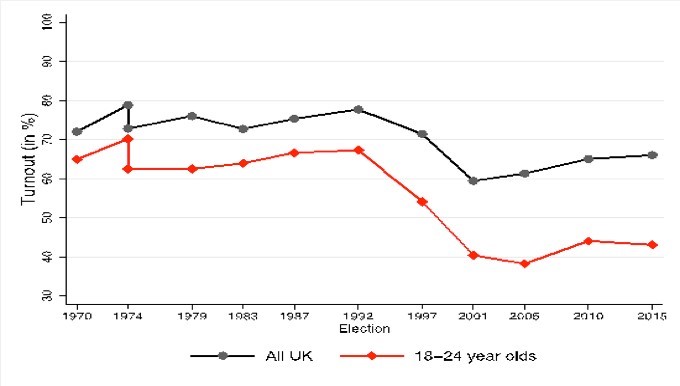 There are myriad reasons why young people have generally been left out of the political discourse and policy offerings in recent years, not least their declining tendency to vote.

The asymmetry between older people’s voting numbers and, say, fuel, bus passes and pension increases compares starkly with cut benefits and increased education costs for the young and their turnout.

The political attitude of ‘if you don't vote you don't get’ is upended by this election. The cycle of young people not voting because nobody offered them anything and politicians not offering young people anything because they don’t vote may finally be broken. We’ll look at what it is that persuaded them to join the conversation this time.

Campaigns are won by leaders with charisma with appealing pledges, whether that be appeals to the head and wallet or heart.

The Conservatives lacked any of the above when they produced - to quote the renowned socialist Andrew Neil - “a manifesto with a load of un-costed and half-baked policies.”

Theresa May’s reluctance to debate opposition leaders and her seeming inability to offer anything but platitudes and soundbites when quizzed on important issues only helped to increase the pressure on her party - and her campaign’s sense of desperation.

Corbyn meanwhile offered what he called the “politics of hope.” By pledging to remove barriers that obstruct the potential and aspirations of many young people who see themselves as global citizens, an identity undermined by the EU referendum result and Theresa May’s obnoxious lie that a ‘citizen of the world is a citizen of nowhere’.

As it turns out, citizens of nowhere can still vote here - and they voted to slash the PM’s majority.

It seems likely Corbyn’s highly optimistic manifesto did more for the cause than Brexit politicking; it was a refreshing set of proposals to put forward and some said impossible to achieve but the message was at least clear and the electorate knew where Labour stood: for change.

The opposition however were still busy trying to find a theme, a message, an identity; whenever it appeared that they had done so it was swiftly followed by U-turning on key policies.

One of the big draws of Labour was their pledge to end tuition fees and this showed as key university towns and cities turned red.

There are rumblings that this was an ideological bribe from Corbyn to secure an easy vote from students as some don’t feel it’s economically viable, but that’s a separate matter for another time - but suffice it to say that the 5th richest country in the world can afford it.

It is disingenuous to suggest that the dangling carrot of free tuition was the reason the young flocked to Labour, considering that for the last two years, way before any talks of an election taking place, Corbyn’s party was propped up by the grassroots sector of the membership – primarily the young activists and ever-growing number of new members.

Not only was this welcomed by the young nurses and doctors, but also the wider public who feel that our public services have taken the biggest hit during seven years of austerity, imposed by the Conservative party.

Labour also proposed a house-building programme meaning many more would be able to get onto the property ladder.

These messages didn’t chime only with the young, there was universal appeal. Mix optimism and popular manifesto pledges with a consistently condescending tone from opposition senior government figures – ‘magic money trees’ were a late entry, alongside all the other 2017 soundbite classics - and a morally and intellectually bankrupt manifesto results in the makings of a campaign gaining pace.